Due to construction, Rocky Branch Park will be closed to the public beginning January 4th until further notice.

The City of Belmont is working with the North Carolina Department of Transportation (NCDOT) to build a 10-foot greenway along the inactive railroad corridor that runs from downtown Belmont north to Belmont Abbey College and on to Woodlawn Avenue. 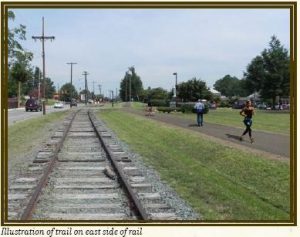 This trail would provide a safe and convenient pedestrian and bicycle connection between downtown, the Sisters of Mercy, Belmont Abbey College, and North Belmont. It is also a part of the Carolina Thread Trail.

The City completed a feasibility study on the project in 2011 that was funded by a grant by the Carolina Thread Trail. The study was conducted by LandDesign and HDR and was facilitated by a steering committee consisting of representatives from:

The study included the feedback we received during several public meetings and from interviews with stakeholders. The study showed the preferred location of the greenway, which will be the east side of the railroad tracks for most of the corridor from Belmont Abbey to downtown.

As the NCDOT and City of Belmont were ready to begin the design of the project, both parties were informed that special legislative approval from the North Carolina (NC) General Assembly was needed for the project to continue.  Thanks to the leadership of NC Senator Kathy Harrington and NC Representative John Torbett, this special legislation was approved and signed into law by Governor Pat McCrory in June 2013.

Leasing of the Rail Corridor

Once the lease is in place, the NCDOT and City will begin the project design and engineering. Upon receiving approval of the design, NCDOT will put the construction project out for bid proposals. Once a contractor has been awarded, then the construction can begin.