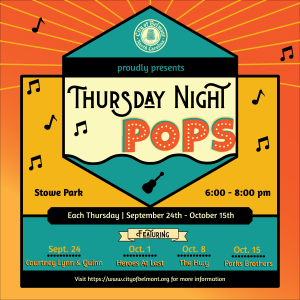 We’d like to re-introduce you to our concert series, Thursday Night Pops, social distance style! Grab some takeout from a nearby restaurant and make your way to Stowe Park to enjoy a free community concert. There will be dedicated seating areas safely spaced that will be available on a first come, first serve basis. Check out our Facebook page to keep up with the latest information!

September 24 – Courtney Lynn & Quinn
“The front-women are putting out their style of Americana music with their debut EP Remiss, which they released this year. Channeling inspiration from the likes of Brandi Carlile, James Bay, and Joseph, CLQ have gained attention for their mixing of familiar genres in different, exciting ways.
Courtney Lynn & Quinn have garnered the attention of many regional and National outlets. They’ve been featured in Queen City Nerve and CLTure Magazine, performed on NBC’s ‘Charlotte Today,’ and won the national Songwriter Universe Contest for their original music. Their debut album Remiss takes their layered harmonies and unforgettable songwriting to the next level, exploring deeper themes of loss, regret – and hope in the future. “